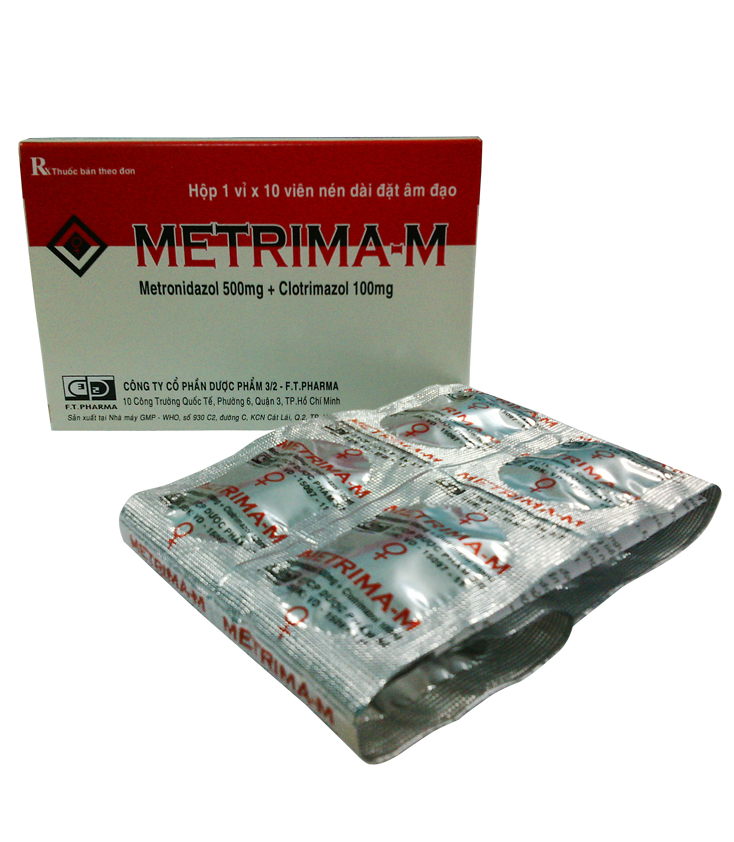 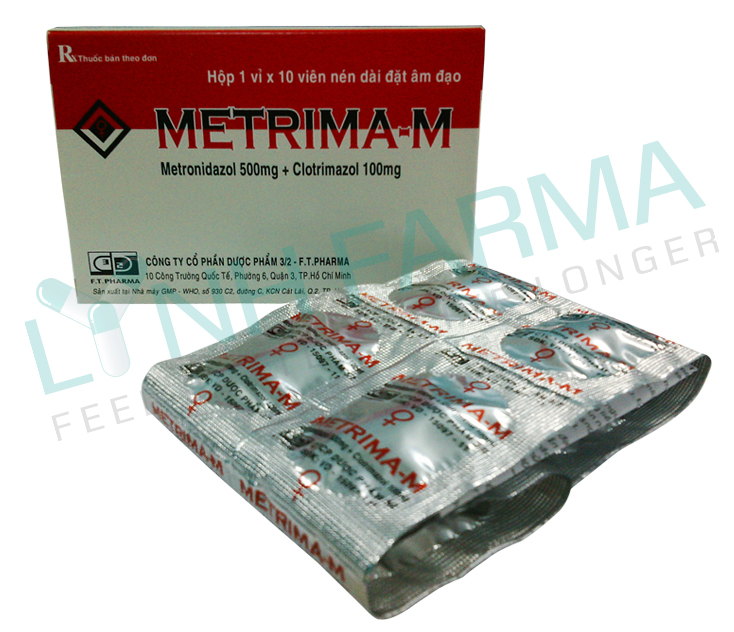 PHARMACOLOGY FEATURES:
The pharmacodynamic properties set:
Metronidazole:
Metronidazole is a derivative of 5-nitro-imidazole, has broad activity on protozoa like amoeba, Giardia and on anaerobic bacteria.
Metronidazole is a drug for the treatment of infections such as protozoa Entamoeba histolytica, Giardia lamblia and Trichomonas vaginalis. Metronidazole has bactericidal effect on Bacteroides, Fusobacterium and anaerobic bacteria other compulsory, but has no effect on aerobic bacteria. Metronidazole resistance was only in a few cases. Trichomoniasis vaginalis can be treated with oral metronidazole or topical. Both women and men must be treated, because men can carry diseases mần without symptoms. In many cases combination therapy vaginal suppository and tablets. When inflamed cervical/vaginal bacteria, metronidazole will cause vaginal flora back to normal in the majority of patients using drugs: metronidazole no impact on the normal bacterial flora in the vagina.

Clotrimazol:
Clotrimazol is a broad-spectrum antifungal agent used to treat the skin disease cases caused by infection with the fungus that causes various diseases and also has an effect on Trichomonas, Staphylococcus and Bacteroides. No effect with Lactobacilli.
Mechanism of action of clotrimazol is associated with the cell membrane phospholipids in fungi, alters the permeability of the membrane, causing the loss of essential intracellular destruction leads to fungal cell.
Invitro, clotrimazol have the effect of containing and fungicidal, depending on the concentration, the strains Trichophyton Rubrum, Trichophyton mentagrophytes, Epidermophyton floccosum, Microsporum canis and other types of Candida.
Clotrimazol natural resistance. Only one strain of Candida isolates resistant guilliermondi clotrimazol. Cross-resistance among common azol.

POINT:
Cervicitis, vaginitis, and inflammation of the vulva - vaginal infection caused by Trichomonas vaginalis with Candida or bacteria.
CONTRAINDICATIONS:
Patients with hypersensitivity to any component of the medication.
Special Notes and warnings when using drugs;
Should not be administered concomitantly with oral metronidazole.
If there is irritation or sensitization when used should be discontinued and appropriate treatment.
Have enough time drug treatment although symptoms relieved. After 4 weeks of treatment, if not better to the doctor again.
Telling doctors if they showed increasing irritation, signs of hypersensitivity.
Avoid sources of infection or reinfection.
Precautions for pregnant women and nursing mothers.

INTERACTIONS WITH DRUGS:
Clotrimazol:
Serum concentrations of tacrolimus in liver transplant patients increase when administered concomitantly with clotrimazol. Therefore, tacrolimus dose should be reduced on demand.
Metronidazole:
Disulfiram Metronidazole effect. So do not use this medicine at the same time 2 to avoid toxic effects on nerve as psychosis, confusion.
Coadministration metronidazole and metronidazole phenobarbital should increase metabolism faster elimination metronidazole.
Metronidazole is used for patients with high blood lithium levels (by taking lithium) will make the serum lithium levels rise, toxic.
Metronidazole increase the effect of muscle relaxants veruronium is a non-depolarizing.
PREGNANCY AND LACTATION:
Insufficient research data on pregnant women in the first 6 months. This drug is used for the first 6 months of pregnancy when clearly indicated by your doctor and to monitor carefully.
Metronidazole is secreted in breast milk rapidly, breastfeeding can have plasma drug concentrations by about 15% concentration in the mother. Feeding should be discontinued during treatment with metronidazole.

ADVERSE EFFECTS OF DRUGS:
Metronidazole and clotrimazol not absorbed by the body does not cause systemic side effects. Sometimes it can cause local irritation, in this case need to stop taking it.
Inform your doctor of any adverse effects encountered when taking the drug.

DOSAGE AND ADMINISTRATION:
Every day before going to bed put 1 tablet.
Usage: 1 capsule embedded boiled water for about 20 seconds, set deep in the vagina at night before bed, legs slightly meet again, ready to use for 7 days.
PRESENTATION: Box of 1 blister x 10 tablets vaginally long.
STORAGE: cool and dry place, protected from light, temperature below 30°C.
SHELF LIFE: 36 months from date of manufacture.
- Vaginal Tablets METRIMA-M met the TCCS.
- Keep out of reach of CHILDREN. Carefully read the manual before use.
- If you need further information, please consult your doctor.
===============================================