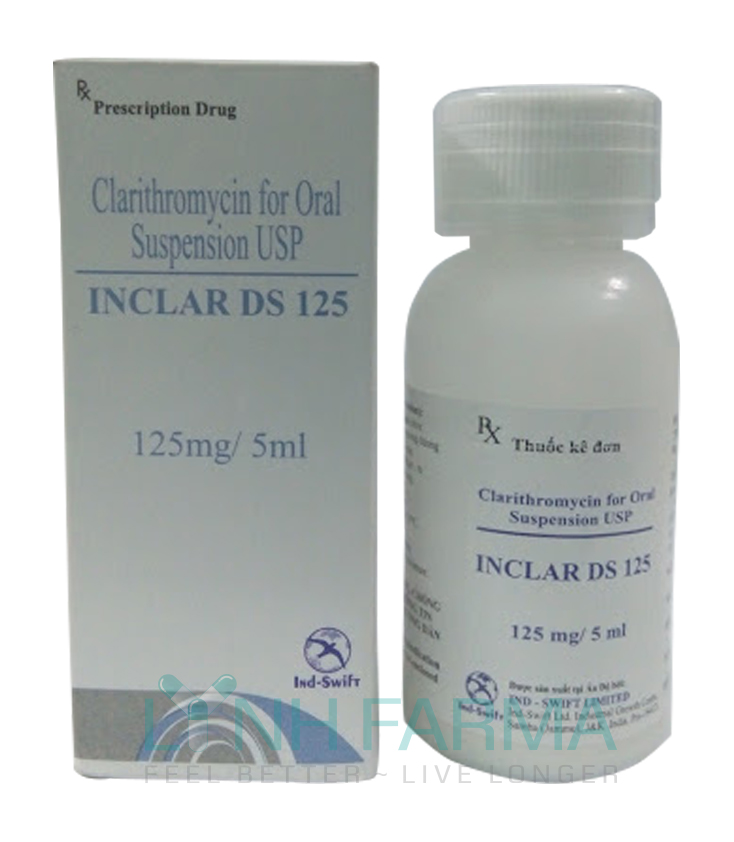 Clarithromycin is indicated for the treatment of bacterial infection such sensitive tonsillitis, otitis media, acute sinusitis, chronic bronchitis, acute exacerbation, pneumonia, skin and soft tissue. This is difficult to perform in Vietnam because the majority of bacteria are now resistant to all types of macrolide antibiotics.

HOTLINE: 0917 55 70 88
- Company address: 49A30 Phan Dang Luu,Ward 7, Phu Nhuan District, Ho Chi Minh City, Vietnam.
- Email: info@lynhfarma.com
Inclar DS 125 mg (Clarithromycin USP)
Dosage: Powder for oral suspension.
Ingredient:
Each 5 mL of reconstituted container
Clarithromycin granules equivalent
Clarithromycin USP 125 mg
Clarithromycin granules Eqv.to
Clarithromycin USP 125 mg
Clarithromycin is a macrolide antibiotic semisynthetic. Clarithromycin is usually bacteriostatic effect, although it may have antibacterial effects in high doses or for very sensitive strains. Clarithromycin inhibits protein synthesis in sensitive bacteria by binding to the ribosomal 50S subunit. The effect of clarithromycin position apparently is well positioned effect of erythromycin, clindamycin, lincomycin, and chloramphenicol. Clarithromycin erythromycin effect a bit stronger against Moraxella (Branhamella) catarrhalis, and Legionella spp. The effect was particularly strong for Chlamydia spp, Ureaplasma urealyticum and other macrolide antibiotics than for intracellular Mycobacterium avium (MAI = Mycobacterium avium intracellulaire). It also works with M. leprae. In some documents it comes to in vitro effects voiToxoplasma gondii and have some effect with Cryptosporidis. Metabolite 14 - hydroxy clarithromycin active and can be synergistic in vitro with the parent drug to significantly increase the activity of clarithromycin in clinical practice for Haemophilus influenzae. Metabolites have a half life of 4-9 hours. Clarithromycin is tolerated in the stomach - better bowel erythromycin. Clarithromycin affinity for CYP 3A - 4 lower than erythromycin drug interactions and thus less important clinically. However clarithromycin is contraindicated with astemizole share, cisapride and terfenadine.
Oral Clarithromycin is rapidly absorbed from the gastrointestinal tract and metabolized first subject at a high level makes the bioavailability of the parent drug dropped to about 55%. Absorption is almost not affected by food. Peak concentrations of the major metabolite of clarithromycin and 14 - hydroxy clarithromycin is about 0.6 to 0.7 micrograms / ml, after taking a single dose of 250 mg. At dynamic equilibrium at the same dose on the peak concentration of about 1 micrograms / ml.
The pharmacokinetics of clarithromycin is not linear and dose-dependent. Large doses can make the peak levels did not increase in proportion as saturated drug metabolism.
Clarithromycin and major metabolites are widely distributed and tissue concentrations exceeding serum concentrations of the drug due partly been absorbed into the cells. Many drugs metabolized by the liver and excreted through the bile ducts distributed. A significant portion is excreted in the urine. About 20 and 30%, respectively with 250 mg and 500 mg dose is excreted in urine as not metabolized. 14 - hydroxy clarithromycin and other metabolites are excreted in the urine. Half-life of clarithromycin approximately 3-4 hours when patients taking clarithromycin 250 mg, 2 times / day, and approximately 5-7 hours when the patient dose is 500 mg, 2 times / day. Half-life is prolonged in patients with renal impairment.
The situation for macrolide-resistant bacteria in Vietnam tends to increase rapidly. These bacteria are often resistant to erythromycin resistant to macrolide antibiotics also include clarithromycin.
Erythromycin resistance levels of Staphylococcus and Streptococcus is 44% (ASTS, 1997) and is approximately 25% of S. pneumoniae (ASTS, 1996)
Point
Clarithromycin is indicated alternative to penicillin in people who are allergic to penicillin bacterial infection such sensitive tonsillitis, otitis media, acute sinusitis, chronic bronchitis, acute exacerbation, pneumonia, skin and soft tissue . This is difficult to perform in Vietnam because the majority of bacteria are now resistant to all types of macrolide antibiotics.
Clarithromycin should be reserved for the treatment of pneumonia caused by Mycoplasma pneumoniae and Legionella, diphtheria and whooping cough early stages of infection and opportunities caused by Mycobacterium (complex lung disease due to MAC: Mycobacterium avium complex).
Clarithromycin is used in combination with proton pump inhibitor 1 or 1 histamine receptor antagonists, H2 and sometimes with other antibacterial drugs to 1 Helicobacter pylori eradication in the treatment of celiac disease - duodenum is progressing.
Contraindications
Who are allergic to macrolide antibiotics. Absolute contraindications administered with terfenadine, especially in the case of heart disease, such as arrhythmia, bradycardia, about Q - T prolonged ischemic heart disease locally or electrolyte imbalance.

Careful
Deterioration of renal function, liver.
Pregnancy
During pregnancy, use only when absolutely necessary clarithromycin and monitored carefully.
Breastfeeding period
Be cautious when a breastfeeding for clarithromycin.
Undesirable effects (ADR)
Frequent, ADR> 1/100
Gastrointestinal disorders, especially in young patients with a frequency of 5%. Allergic reactions in varying degrees from urticaria to anaphylaxis and Stevens - Johnson. It may be fake colitis mild to life threatening.

Instructions on how to tackle ADR

Clarithromycin in environmental sustainability and absorption acid with or without food. Clarithromycin longer duration of treatment depends on the type of infection and the severity of the disease and usually lasts 7-14 days.

Clarithromycin is also used in combination with proton pump inhibitors and other medications at doses of 500 mg, 3 times / day to nhiemHelicobacter pylori eradication.

The most important interaction of macrolide antibiotics with other drugs likely due macrolides inhibit hepatic metabolism of other drugs. Cytocrom P450 inhibitory effect evident after taking clarithromycin.

Medication must be prescribed and sold as single injection, oral.